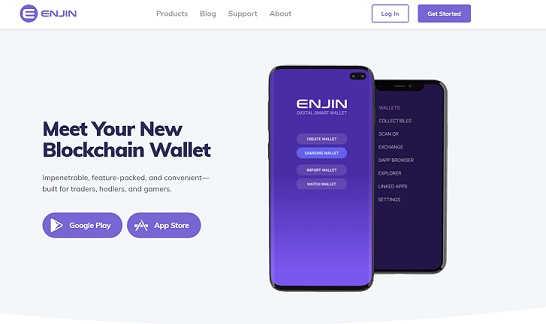 If you’ve been trying to keep up with the latest developments in blockchain gaming, you’ve probably heard of Enjin Coin, an inter-platform cryptocurrency token designed for online games.

But what exactly is Enjin Coin? What games use it? How does it work? In this article, we attempt to answer these questions.

What is Enjin Coin?

Enjin Coin is an ERC-20 token or currency on the Ethereum blockchain. It is a solution to the problem of low liquidity in the digital collectibles market.

Developers of Enjin games use Enjin Coin (ENJ) to “mint” collectibles. To do this, the developer sends currency to a special contract where it is stored and simultaneously creates an ERC-721 token that is a collectible for the game.

This process is meant to mimic that of minting and melting gold jewelry or other collectibles made from precious materials.

Solving the problem of low liquidity

Enjin Coin is meant to solve the problem of low liquidity in the digital collectibles market.

If a player is considering whether to invest in a game by buying its collectibles (or spending time playing it to earn them), he probably wants to know if he will be able to sell the collectibles should he decide to stop playing.

But like all collectibles, digital game objects have an illiquid market. Finding the exact player who wants a particular collectible and is willing to pay the market price is difficult.

If a player has acquired especially valuable objects in the games he has been playing, it may take him weeks or months to find a suitable buyer.

This problem may prevent a player from playing a game he otherwise would, especially if the game is not well known. He may be afraid that he will be throwing away his investment by playing it.

Enjin Coin helps to solve this problem by allowing the player to melt his collectible and get back a highly liquid currency in the form of ENJ itself.

Even if a game falls in popularity or stops being developed, a player can still get a minimum amount of ENJ out of the collectibles he earned or purchased. This helps to eliminate player fears and encourages them to try out games they otherwise wouldn’t.

Most Enjin-Coin games are currently in beta or demo form. However, these are some of the most popular and highly anticipated projects being developed in the crypto-collectible space.

Many of these games have top-notch graphics and sound, as well as sophisticated gameplay systems.

How to use an ENJ Wallet

Open a browser on your mobile device, and navigate to the official download page for ENJ wallet.

Click on the Google Play or Apple App Store link. From here, you can install the wallet just like you would any other app.

The first time you open the app, you’ll be asked which currencies you want to keep track of. select whichever currencies you are most interested in. This can be changed from the settings menu later.

Backing up the wallet

The main menu will appear, and A red warning sign will display telling you to back up your wallet. Click this warning to get access to your seed words.

This section will take a deep dive into Enjin Coins’ development history and explain how it works in detail.

The history of Enjin Coin

Before Enjin Coin, there was Enjin Network: one of the most popular site-hosting platforms in the world for Minecraft servers, guilds, and clans.

But despite the success of the network, the team realized that there were deep problems in the player-driven economy of Minecraft. Players put hundreds of hours of work into creating “maps” for other players to navigate.

But in order to make money from this content, they had to either use the official Minecraft marketplace and Minecraft “coins” or else try to set up shop on their own using third-party payment systems.

Using the Minecraft shop increased centralization within the Minecraft economy. This went against the original philosophy of Minecraft of being a decentralized, peer-to-peer game.

On the other hand, using third-party payment systems resulted in high fees and slow payments. This wasn’t a good solution either.

The Enjin Network team concluded that there must be a better way to handle payments between content-creators and players in the Minecraft community, or in any gaming community for that matter.

Before long, the Engine Network team settled on cryptocurrencies as the solution to the problem. Specifically, they decided that the gaming community needed a token based on the Ethereum blockchain and made specifically for gamers.

The Enjin Coin system consists of 6 primary smart contracts. Here is a list of their names:

Because each of these contracts are housed on the Ethereum network, the Enjin Coin team cannot alter them.

This should guarantee that in-game assets are controlled by players and free of centralization from developers.

Players are able to use a Web3 wallet extension such as Metamask to check balances from contracts. However, in an effort to speed adoption, the Enjin Coin team has also made available a public API server that allows games to display this information to players.

This can allow players who do not have a Web3 extension to participate in blockchain games.

All Enjin Coins that back a custom coin are held in the Mint contract. This takes them out of the hands of the game developer and helps to guarantee the honoring of redemptions.

Games are able able to create non-fungible (unique or rare) items that are backed by Enjin Coin by encoding item info into the minting action such as what monster it was looted from or the name of the player who looted it.

Websites owners and games are able to use custom coins to delegate powers.

Enjin Coin has proved so far to be a successful project. Over 20 games are being developed that use the technology. And many of these titles have produced demos with great graphics and gameplay systems.

For example, Forgotten Artifacts, Neon District, and Age of Rust have all surprised crypto-gaming enthusiasts with their high-quality demos.

It’s always possible that some new system could eventually come along that supersedes Engin Coin. But for now, the ENJ ecosystem seems to be growing rapidly. So until there is a substantial change in the crypto gaming market, it looks like it’s here to stay.

What do you think of the Enjin Coin wallet and Enjin Coin games? Let us know in the comments below.