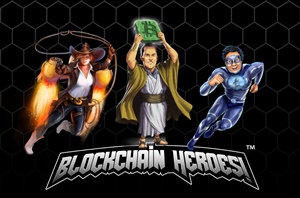 Blockchain Heroes is a collectible digital trading card set featuring original characters inspired by the top creators, defenders, builders and boosters in the blockchain space! This set of NFTs (nonfungible tokens) will be available exclusively on the WAX blockchain.

What if there existed an alternate universe in which the inventors, investors, supporters and evangelists of blockchain were actually superheroes fighting for the virtues of decentralization, privacy, transparency and freedom?

Blockchain Heroes™, an exciting collectible digital trading card set on the WAX blockchain, will make this alternative universe a reality in August 2020. Fifty unique superheroes in a variety of card rarities will be revealed in purchasable card packs. Similar to physical collectible trading cards, each pack of digital collectibles will be randomized and provide unknown surprises. With 50 total heroes, each pack of cards will have the chance to reveal common, uncommon, rare, epic, legendary or mythic versions of any hero in increasing rarity, each with its own special design.

Blockchain Heroes™ is a creative and humorous parody of personalities emerging in the crypto world, presented as the superheroes they might be in an alternate universe. The 50 heroes and designs, with names like The Prophet, Lady Lightning, Captain Currency and Data Avenger, will be revealed on social media and the official website leading up to the sale in August. The back of the cards will feature text describing each hero’s superpower.

Joel Comm and Travis Wright, co-hosts of the popular show The Bad Crypto Podcast, are the developers behind this new trading card set. In nearly three years, the pair have amassed a stunning 9 million downloads of their shows. And in March 2020, they were among the first to act on the cancellation of in-person conferences by producing and hosting the highly successful Virtual Blockchain Week 2020. In May, the duo also debuted The NiFTy Show, a live video podcast focusing on the NFT and digital collectible world.

In May 2020, the Topps Trading Cards company stunned the blockchain world by releasing its infamous Garbage Pail Kids trading cards in digital format on the WAX blockchain. The cards completely sold out in less than 28 hours and are now in great demand among collectors in a secondary market that is seeing up to 25x returns.

“We’ve been dabbling with nonfungible tokens for our podcast listeners for several months,” said Joel Comm, co-founder of Blockchain Heroes™. “When we saw what Topps and WAX were able to create together, we discovered the ideal conduit to release a new product, which we believe will be embraced by the blockchain community. These cards are going to be fun to collect and trade!”

The project is being funded by a grant from WAX Labs, a worker proposal system designed to grow the WAX Blockchain through decentralization and innovation.

“The team at WAX has received many proposals for new projects since the success of the Topps Garbage Pail Kids,” said Evan Vandenberg, director of business development at WAX. “We are excited to be working with Blockchain Heroes to make this exciting collectible card set a reality. Joel and Travis have put together some incredibly creative collecting concepts and artwork. Combine that with crypto-centric themes and characters, and I think you have an incredibly interesting project for the space.”

To be notified of card announcements and launch information, register for free at http://BCHeroes.com.